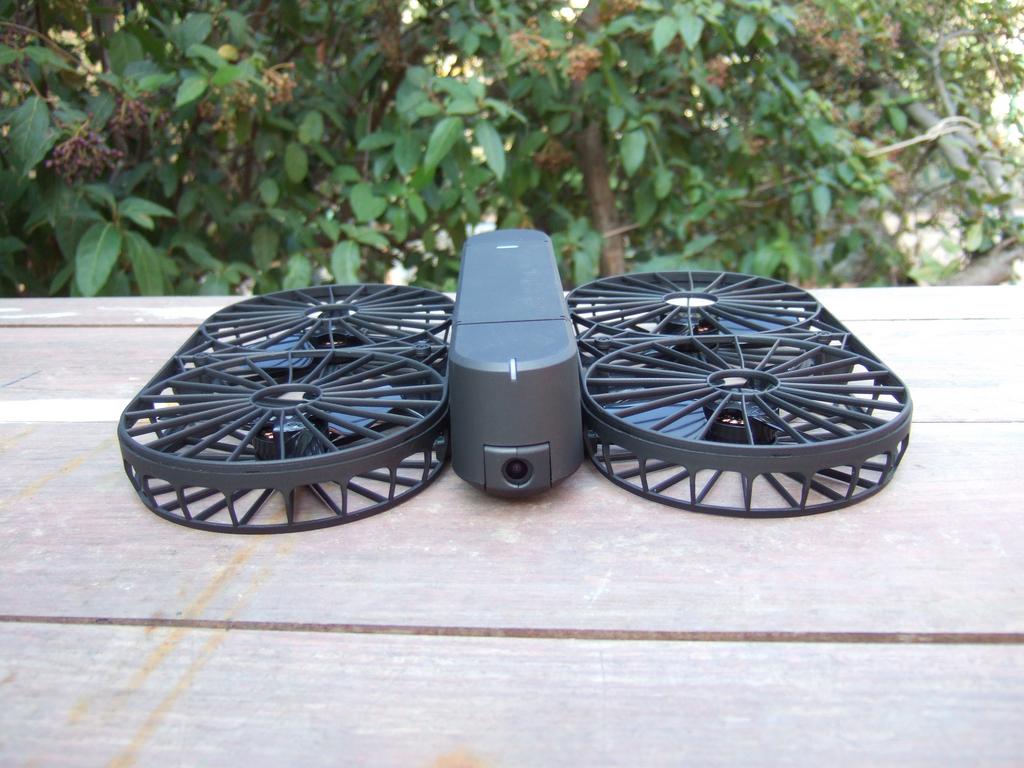 The SimToo Moment is another selfie drone with foldable arms system where props are fully protected by a massive sourounding propguard. The Moment integrates a 12mpx sensor shooting videos in 4K@25fps and in 1080p@60 resolutions. More Electronic Image Stabilization is advertized as well as targer tracking and a new original feature: SLAM for Simultaneously Location And Mapping. SLAM allows to built in real time a numerical mapping of the quadcopter’s environnement. Promoted flight time are announced to be around 15min. Let’s discover this new Zerotech Dobby competitor 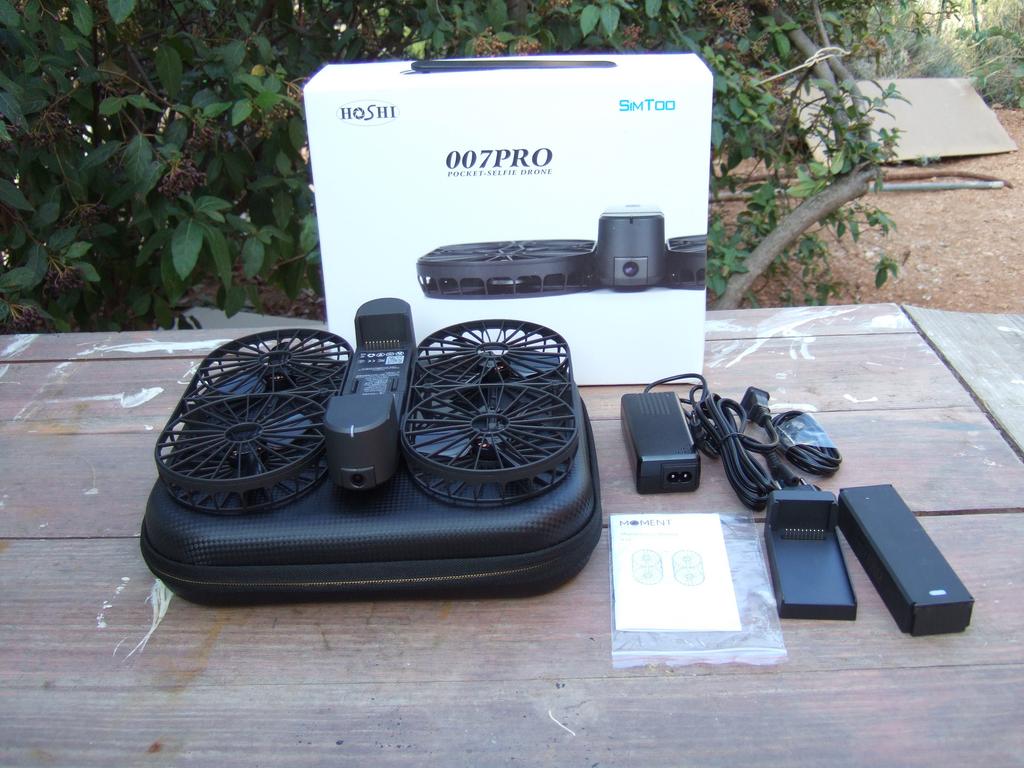 A basic packaging but at least a nice transportation bag. No microSD card in the bundle or spare props. There is another bundle including a second spare battery.

Let’s start with the full list of the technical caracteristics. The SimToo is 200mm machine so far far more larger than the zerotech Dobby. Clearly the indoors applications can be not very the best location to fly the SimToo moment despite the huge propguard system. ESC are 10A…. so no real problem for the 2S setup. The processor is a snapdragon, the same used for the Zerotech Dobby. So technically the EIS can be done since the Dobby got it already. 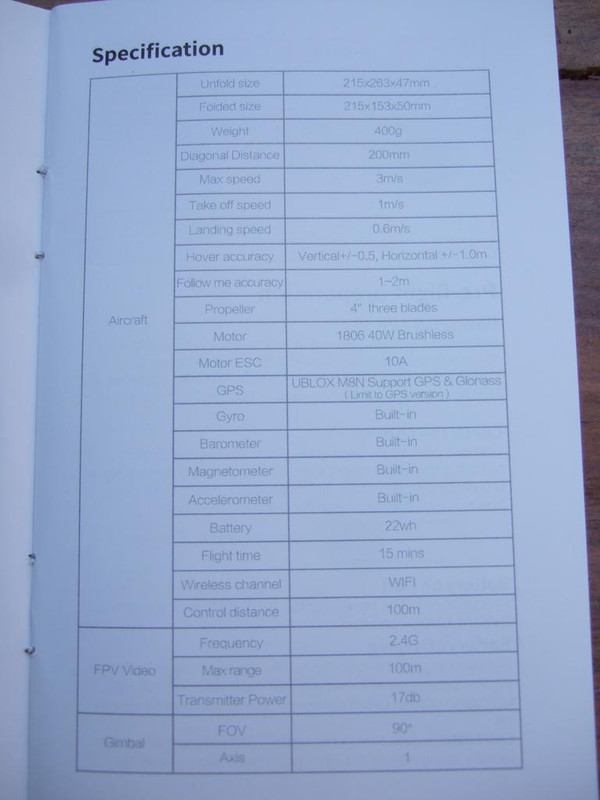 Be aware, the machine requires a microSD card able to write up to 60mbit/s so clearly you need an efficiant class 10 U3. If not, you may have some choppy videos with some lost frames. 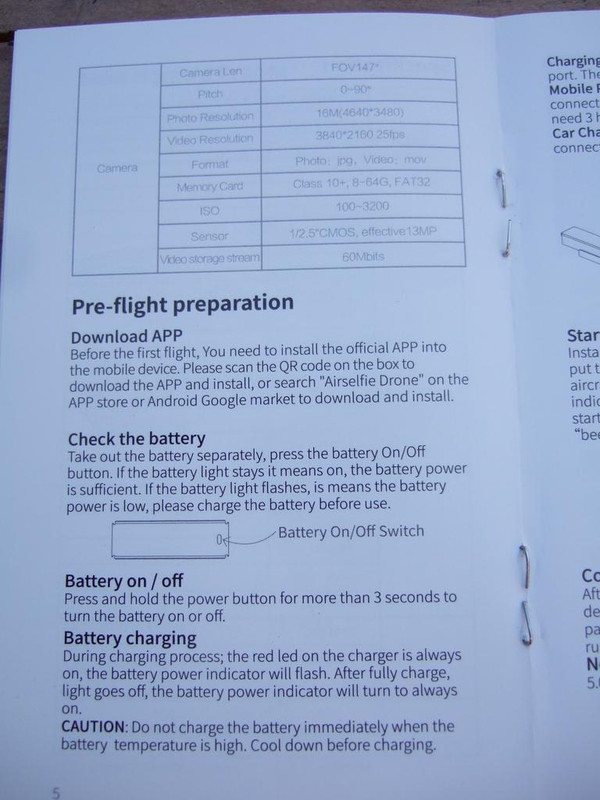 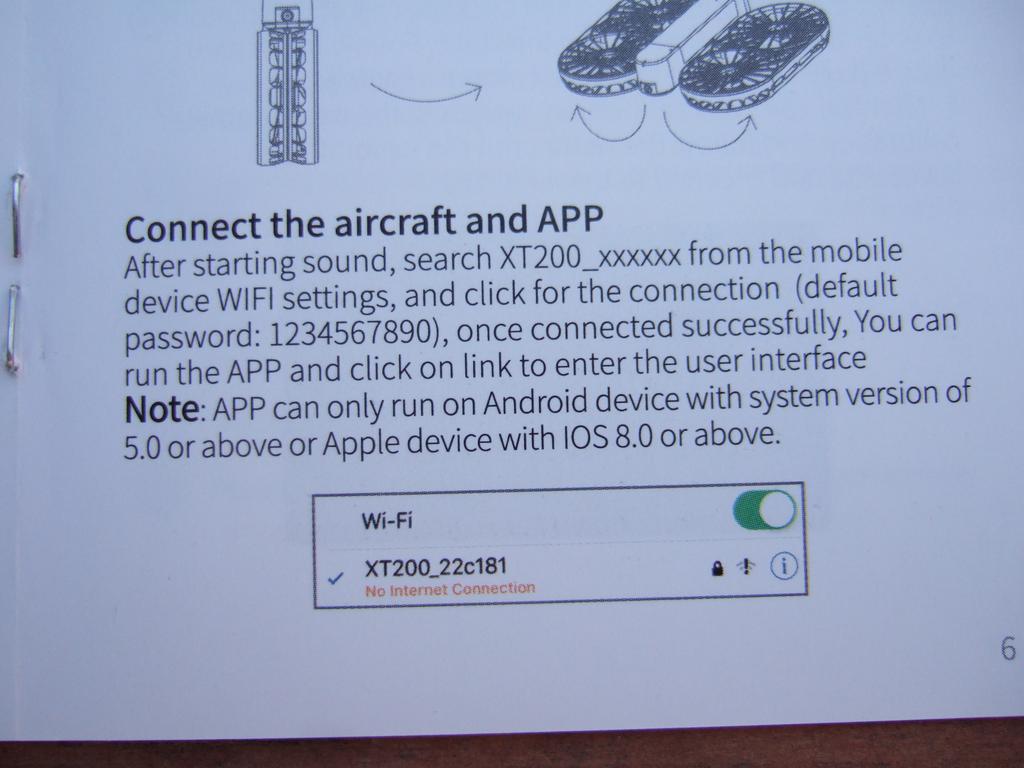 The machine présents an H-design where the smallest motor to motor distance is 15mm. Generally, the Moment is build with a high quality mat plastic super soft to touch at least for the central section. The main problem of this kind of plastic, they are dust catcher… and your machine will be relatively soon a bit dirty especially if you take off from ground surfaces. 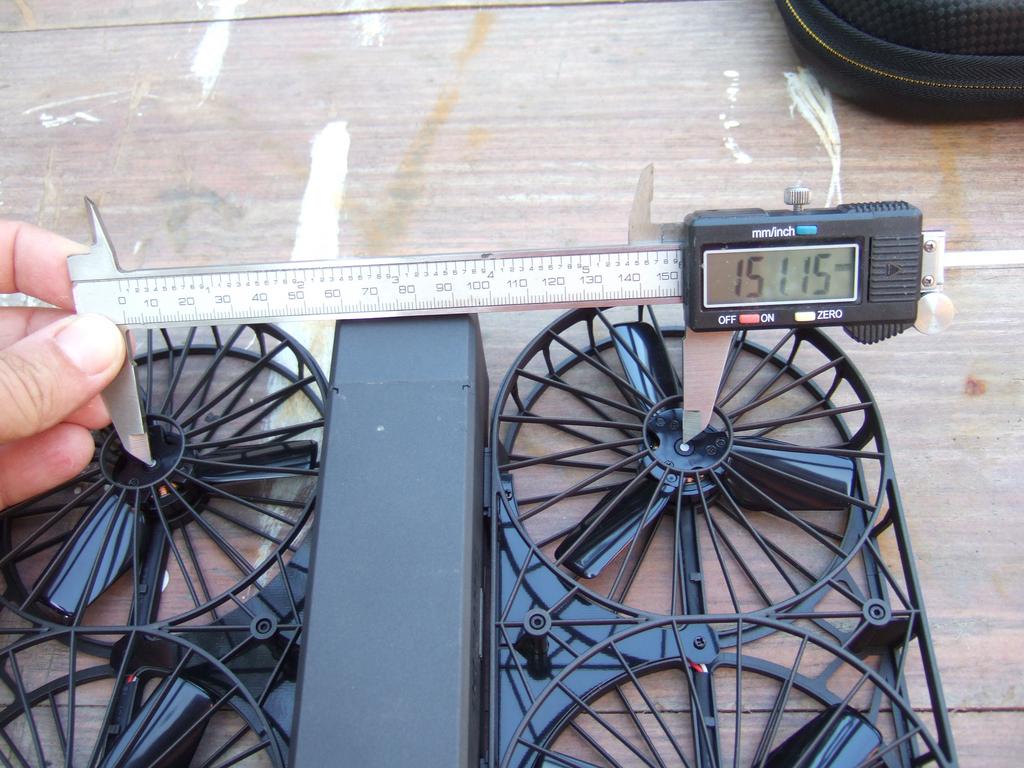 -FRONT VIEW
The machine is really large…. especially for a selfie drone… Far larger/bigger than the Zerotech Dobby and the Alphacam 4K.

The main camera is installed into a tiltable camera support. Be aware since the tilting control is done by a digital servo motors, it’s not advise to touch it manually if you don’t want to break the internal gear system. The propguard system is huge completly jailing the triblade props. No real risk to touch the props even when it’s armed. Palm landing/takeoff are almost 100% riskless.

When folded, the machine can fit barely the carrying suitcase. 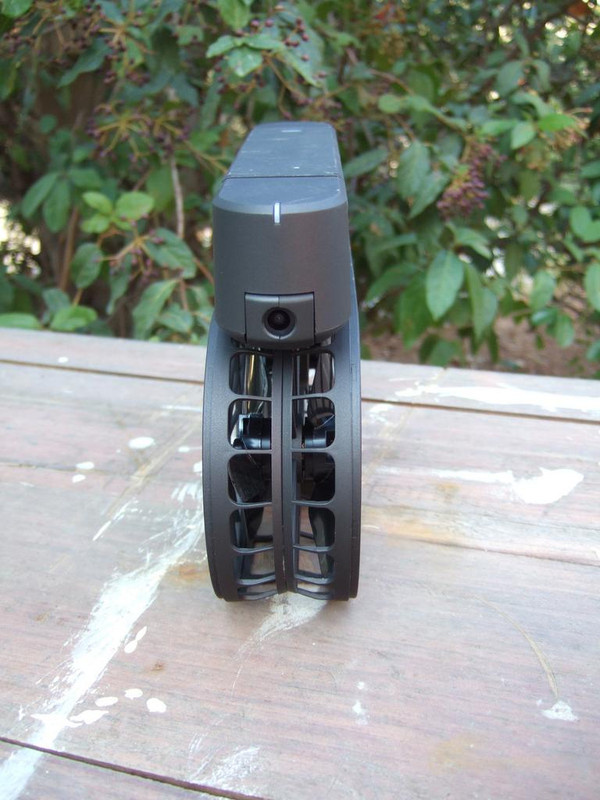 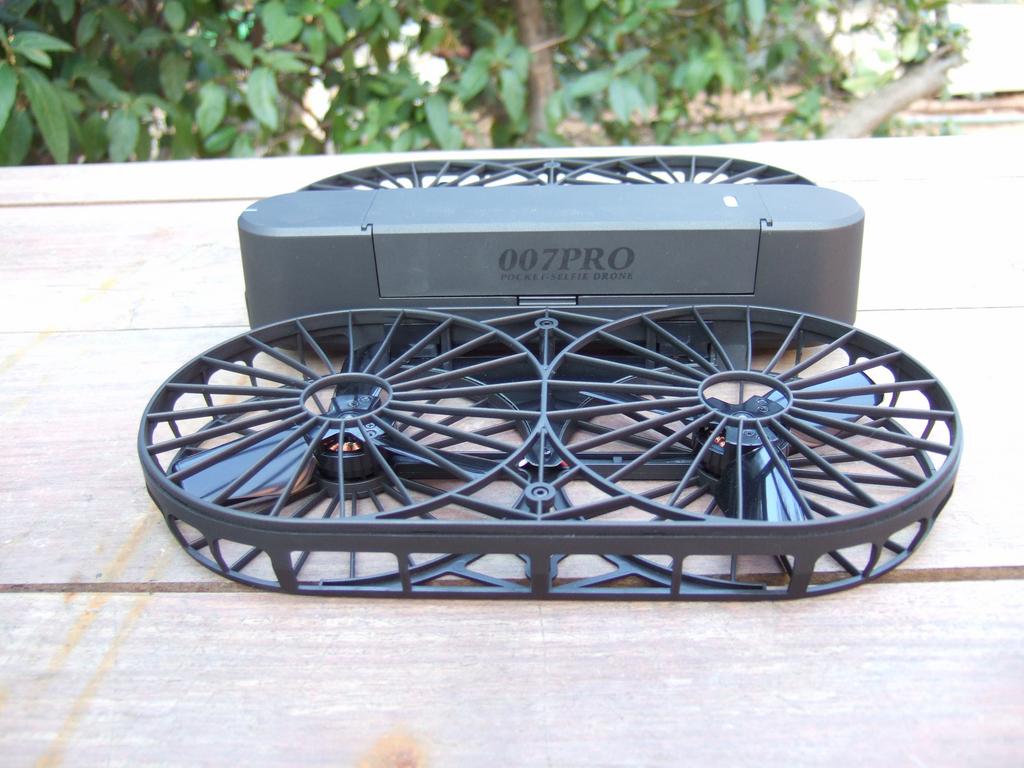 To extract the battery, you need to push strong the two latteral plastic tabs…. In practice it can be hard …. and you even damage a bit the battery during the extraction. 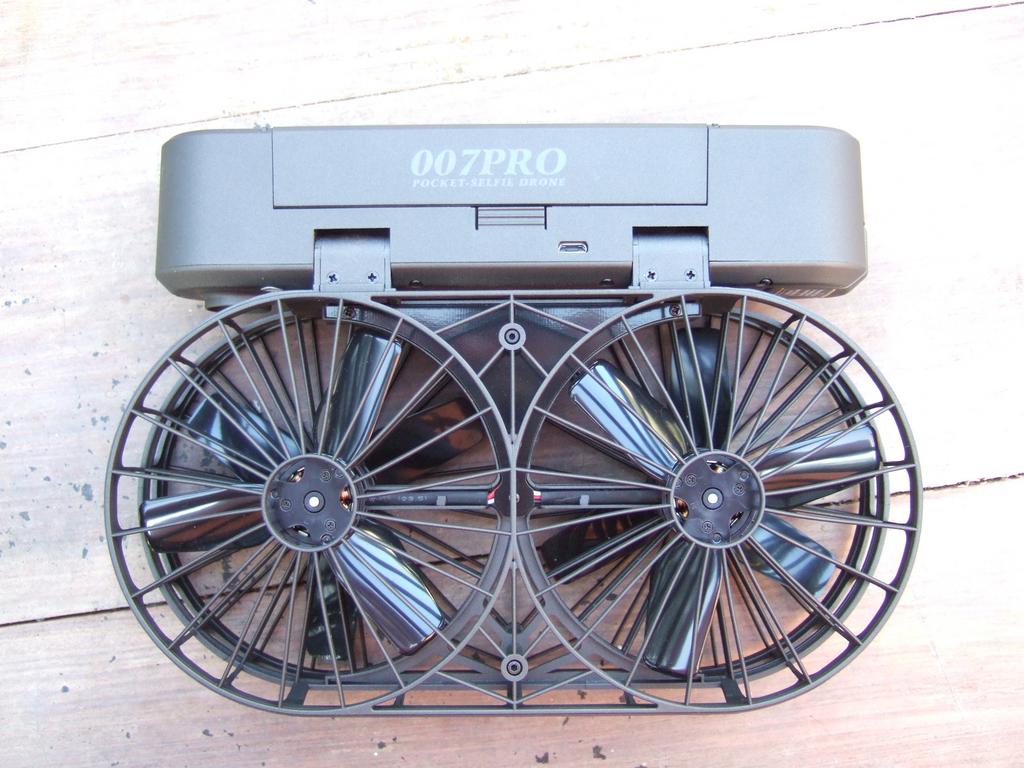 A microUSB port is here maybe for future firmware updates ? 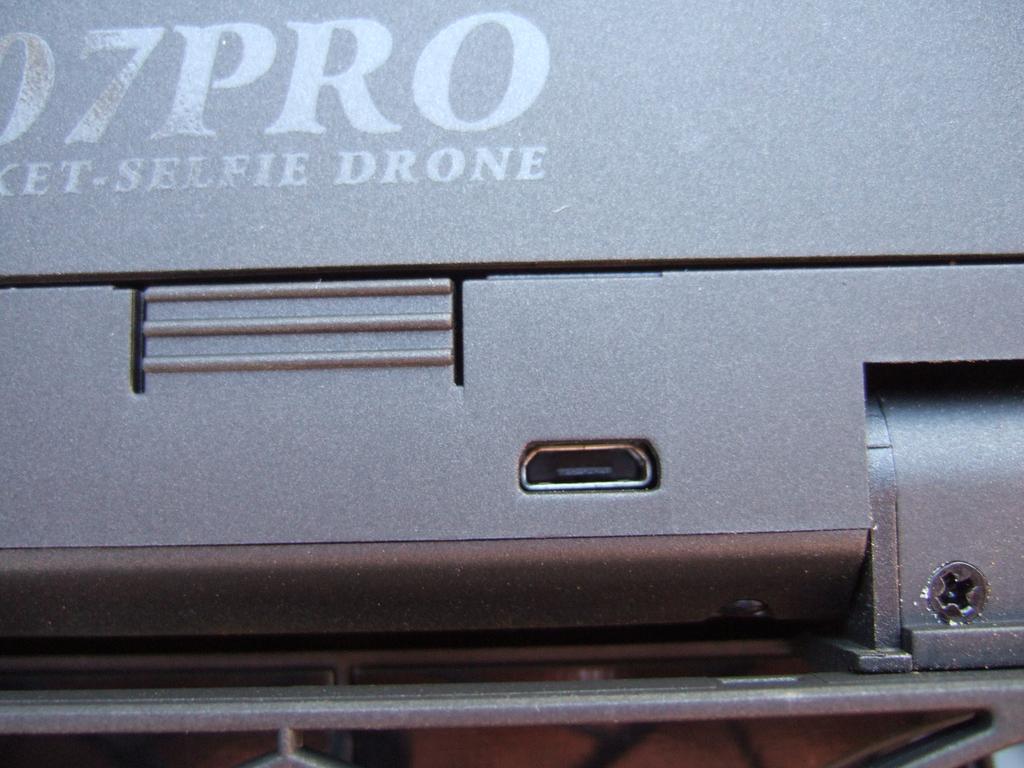 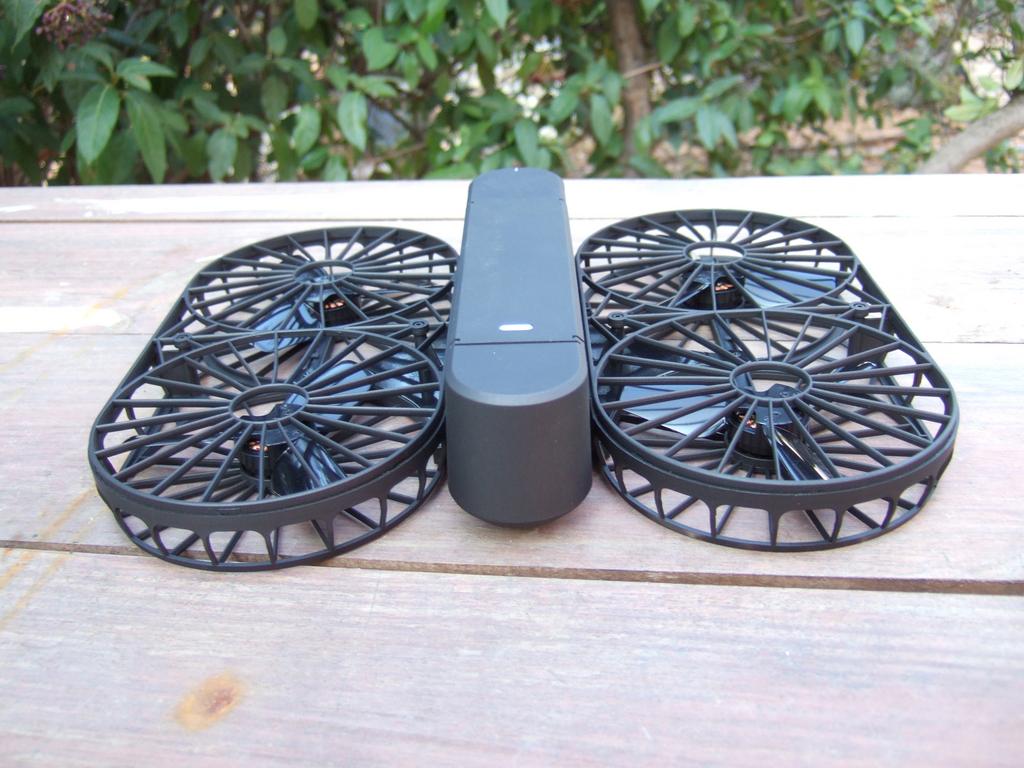 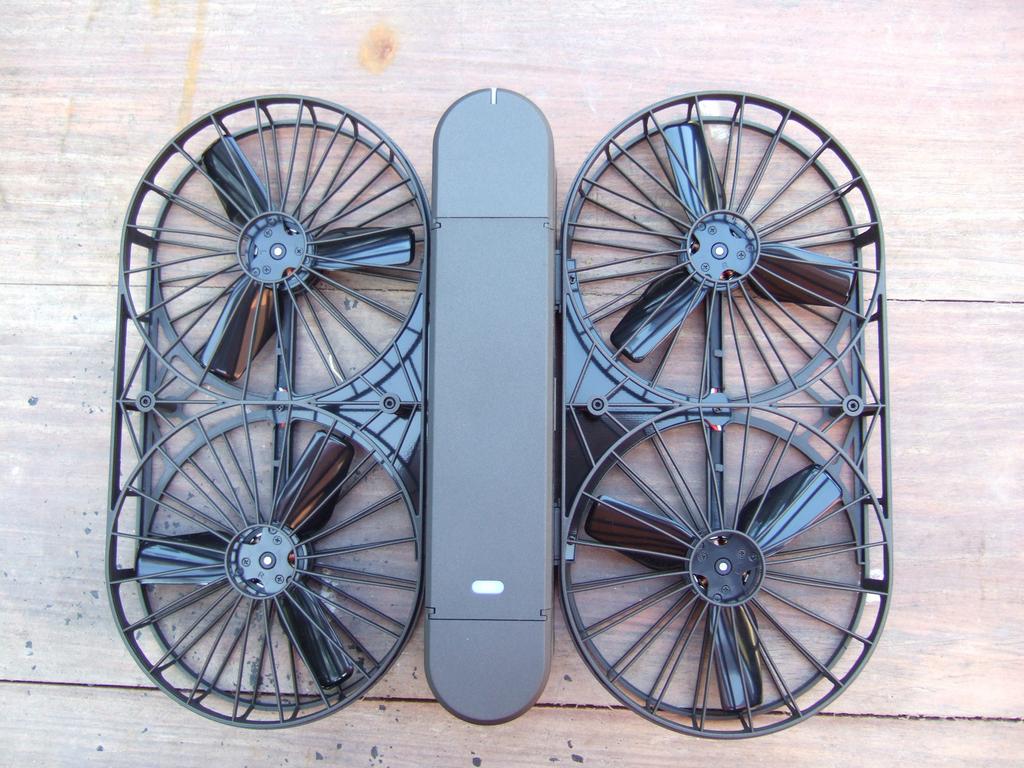 The blue light is also used as the main power button… Hold it more than 4s to boot the machine. A couple of second laters, the ESC music will buzz. 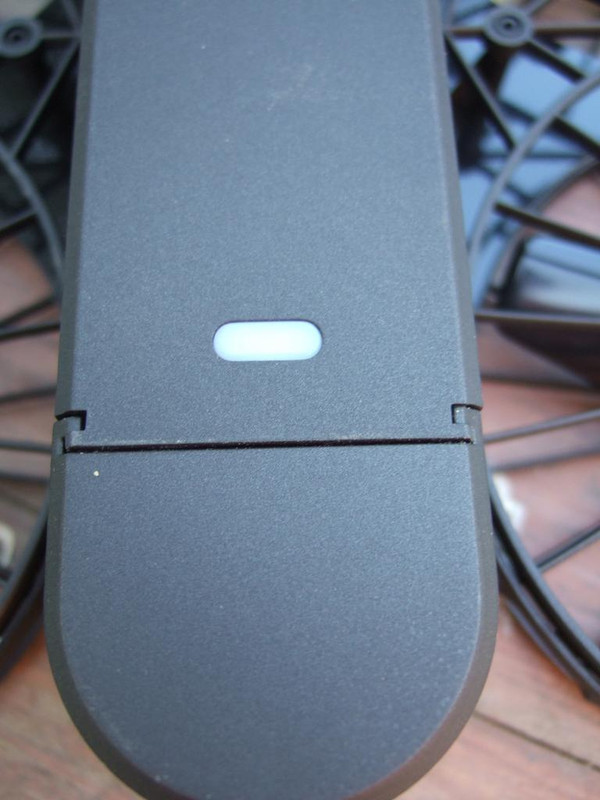 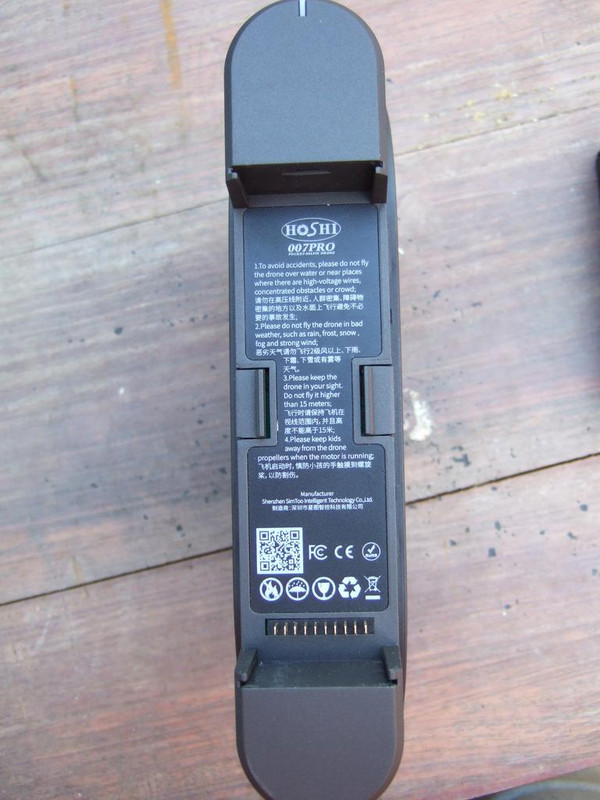 A microSD card is located front. You must absoluptly to insert the card before the battery… And I am sure there will be a couple of time after booting/binding the machine you will realize that your forget to insert the microSD card. One more time be sure to take a super fast card… a V60 or V90 is highly recommanded.

-BOTTOM VIEW
No specific metal element in the foldable system…. so be aware to gently open/close the system even if I didn’t observe any problem with. I am a little bit afraid if a crash occurs…. the weakest part of the machine are these closing system. 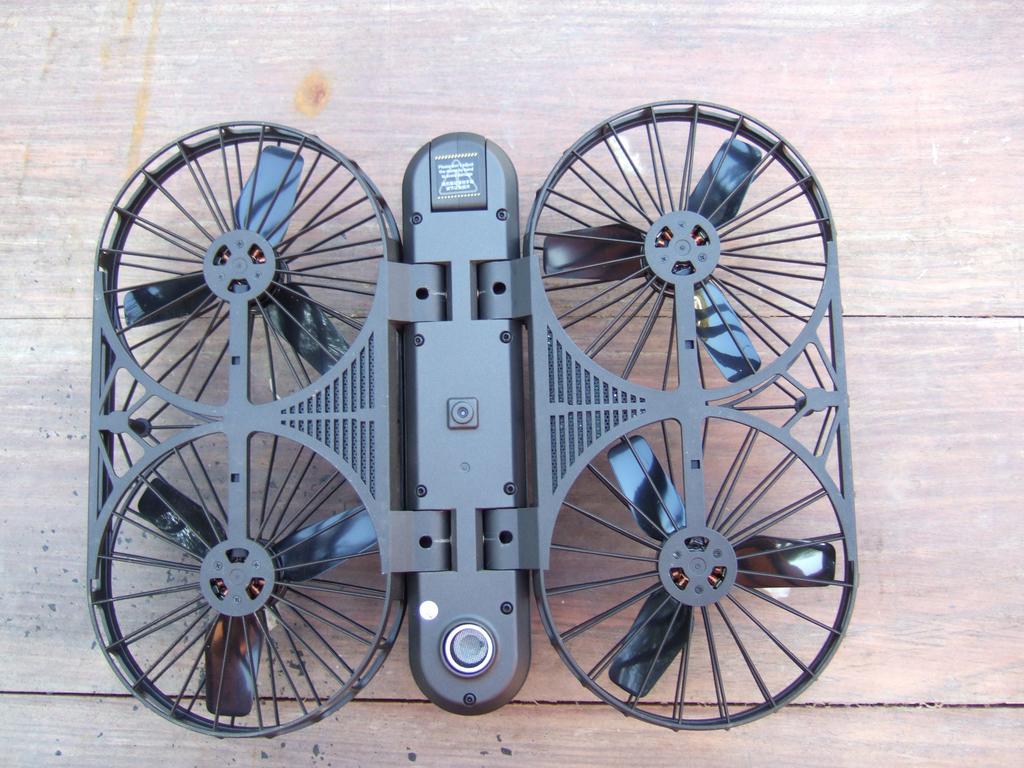 A small camera for visual positionning 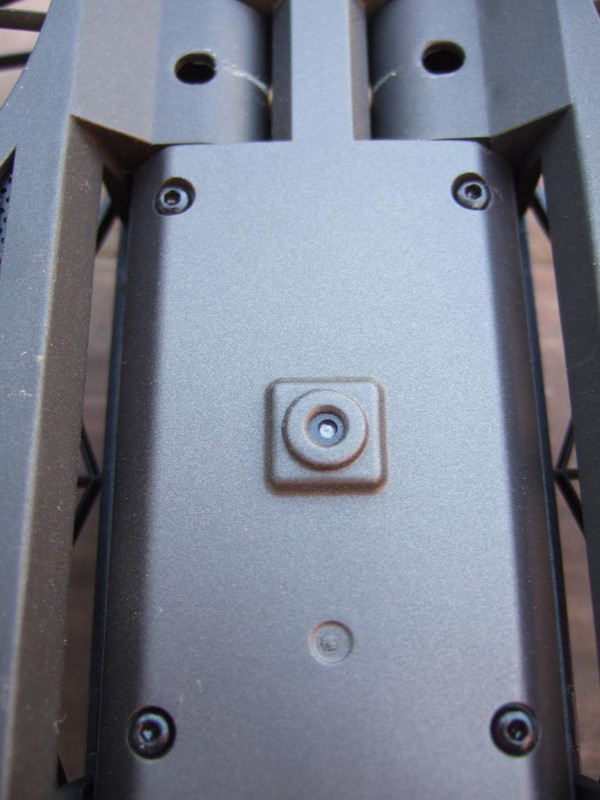 and a ultrasonic sensor. Notice this sensor emits some acoustic impulsion modulated by the distance of the closest object. The further the object/surface is detected, louder are these impulsions. 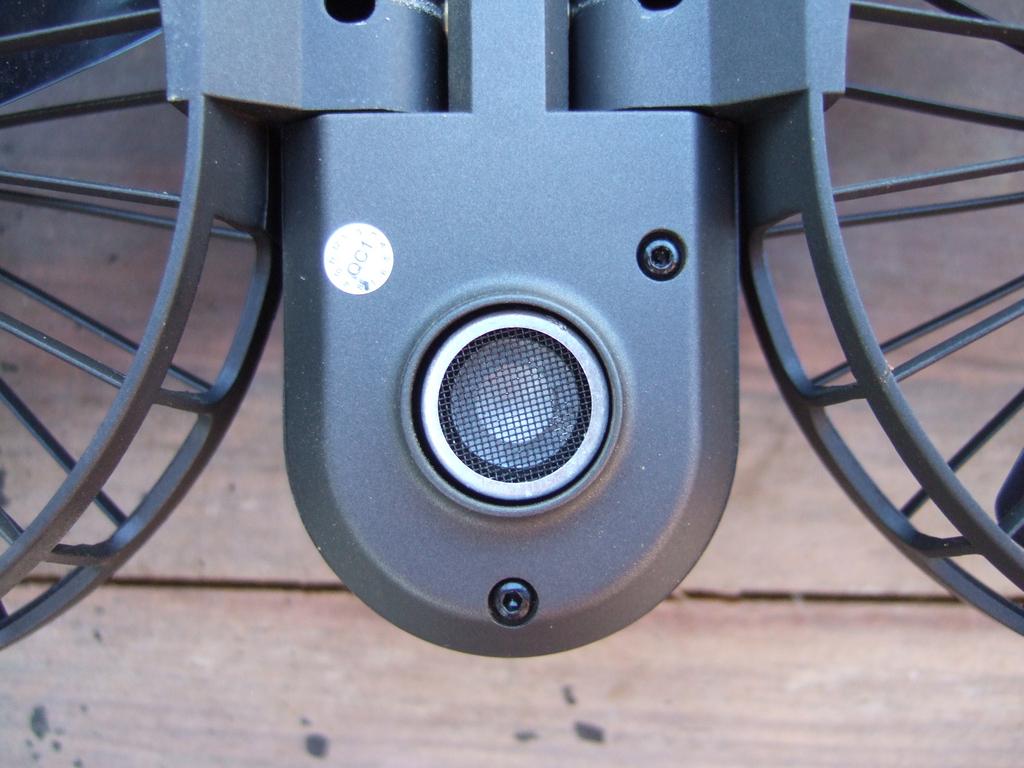 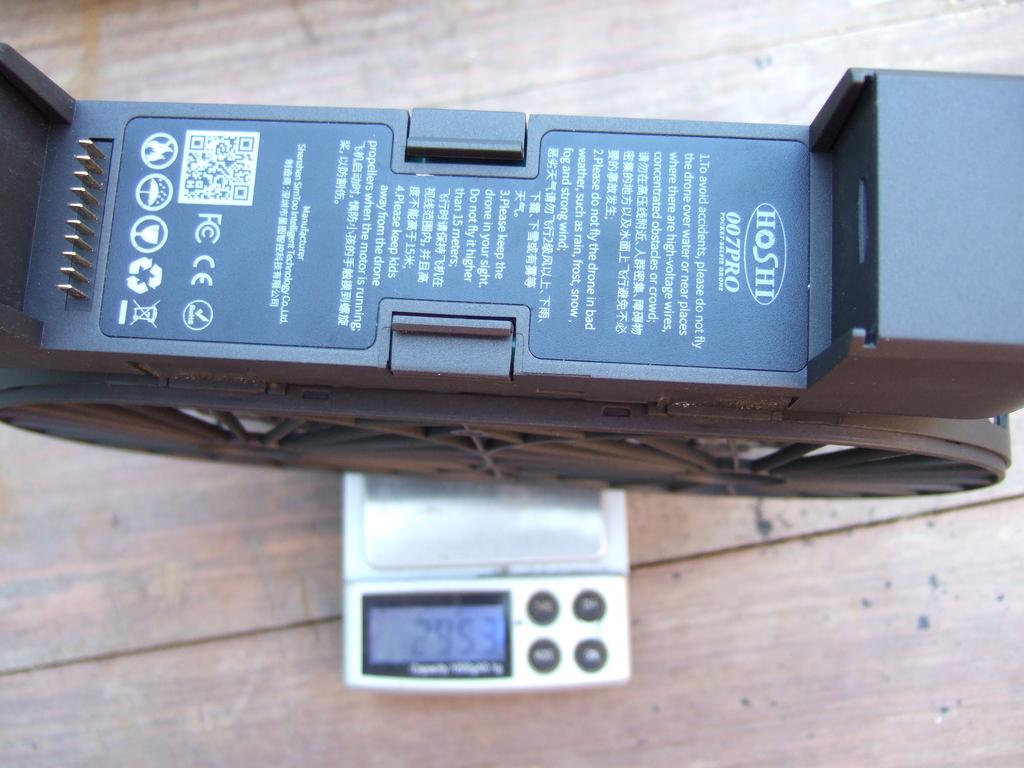 With the battery installed…. More than 420g. It’s a lot compared to the 200g of the Dobby. 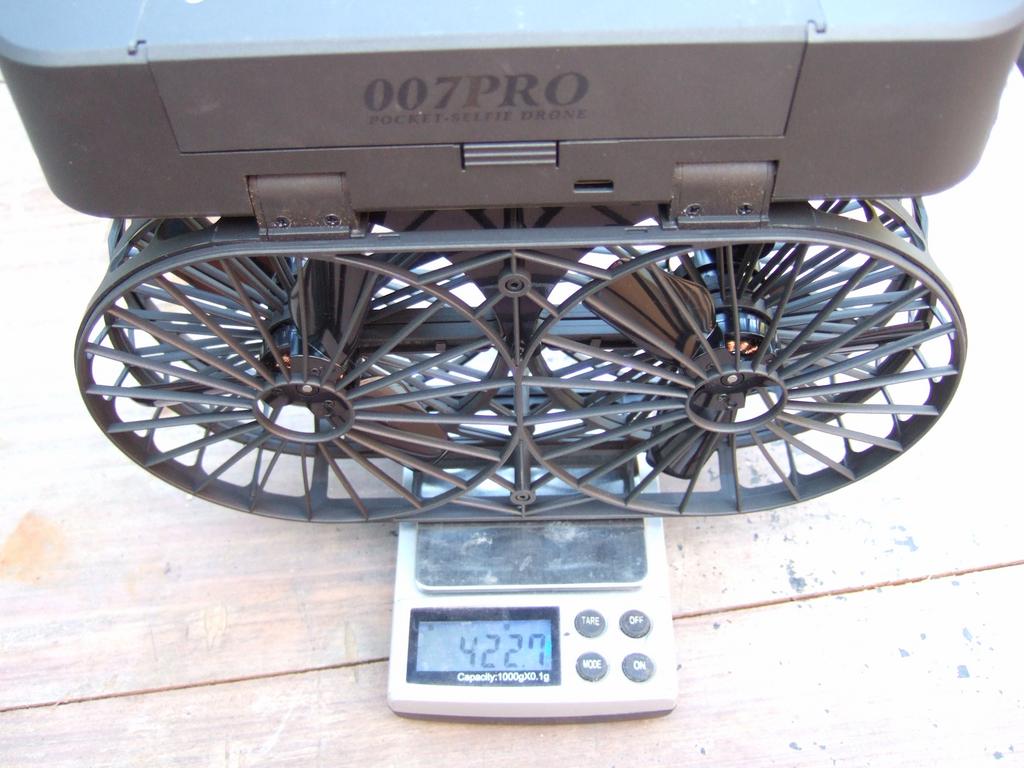 1806 motors…. but any information about their corresponding KV 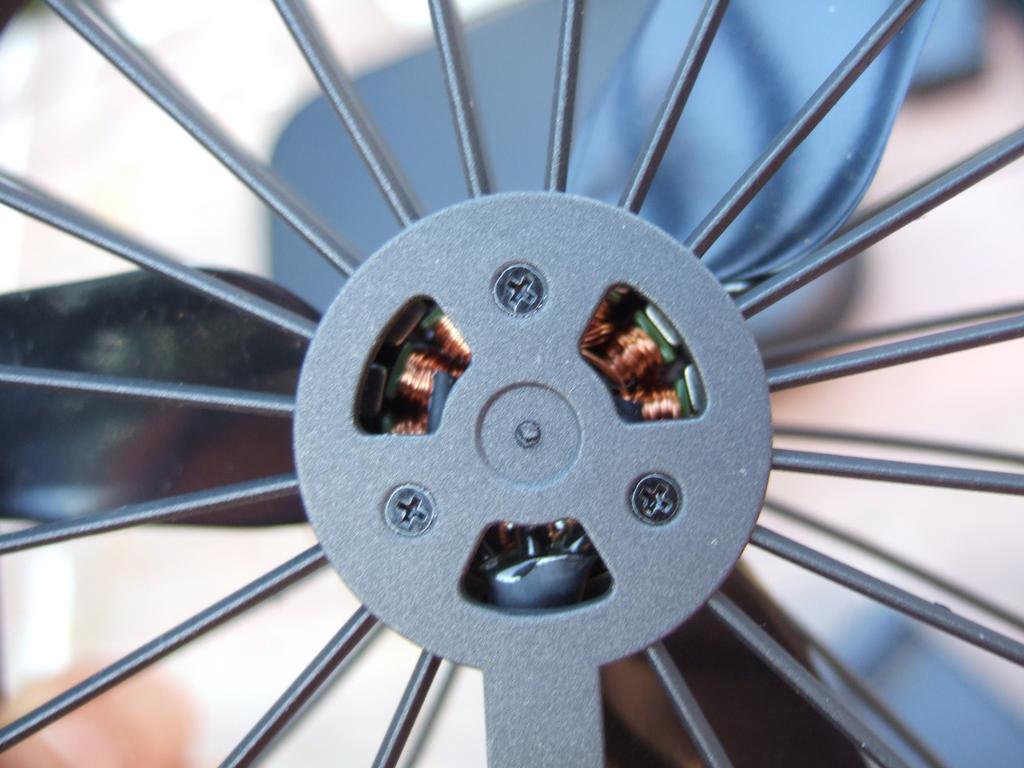 With a large hub section for the props “à la parot”…. No spare props in the bundle ? but what will be the risk to break some with such propguard ? Very low IMHO. 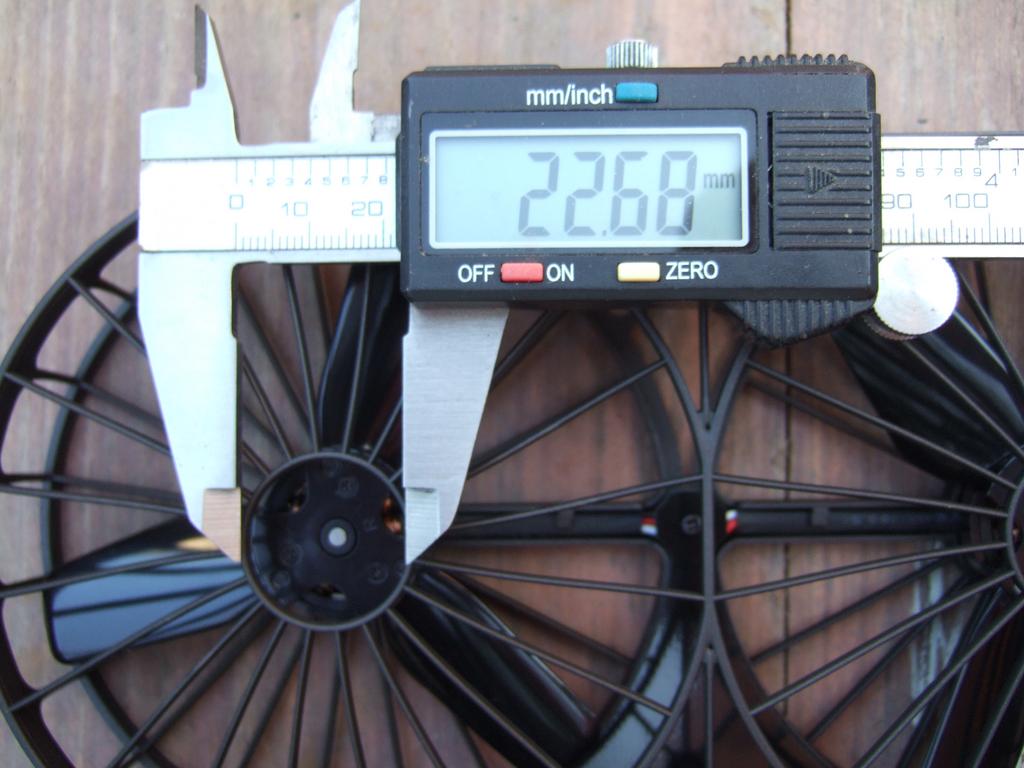 A 2900mAh 2S model but not LiPo based but LiHv.. so boosting individual cell voltage. 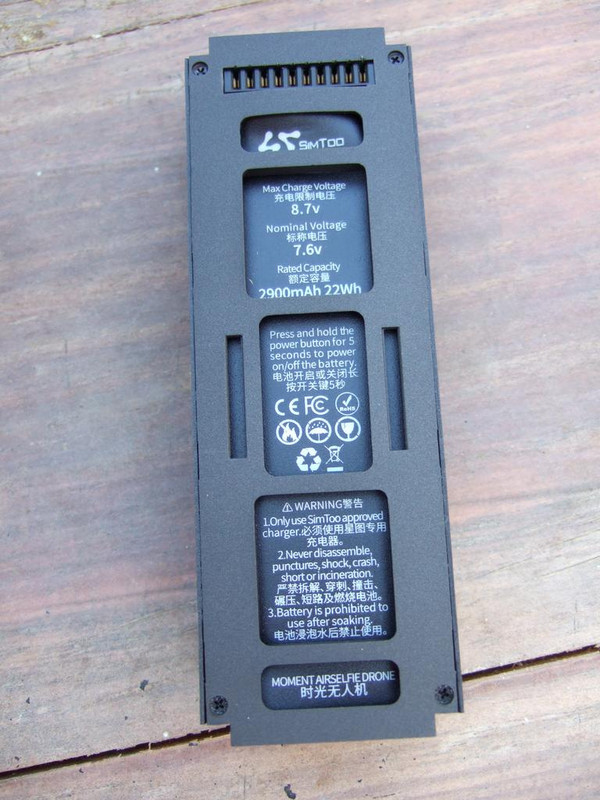 Just a unique blue light flashing when it’s charging. I regret the absence of several light indicating the remaining level of charge and also the absence of a smart storage mode. So be aware if you park this battery a long time to discharge it until 50% 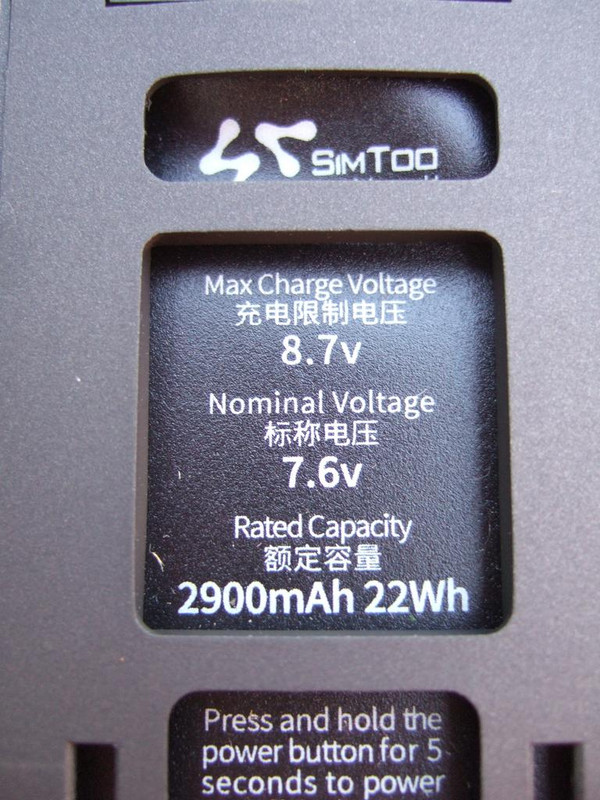 We have a 1/2.5″ CMOS sensor with native resolution of 13Mpx. The FOV is large: 147 degrees. So for EIS, it should be efficient after refocusing on the correct central zone of the image. The maximum photo resolution is 16mpx 4640×3480 so playing a bit with interpolation and video in 4K@25fps. We have more or less the same type of sensor than the zerotech dobby. 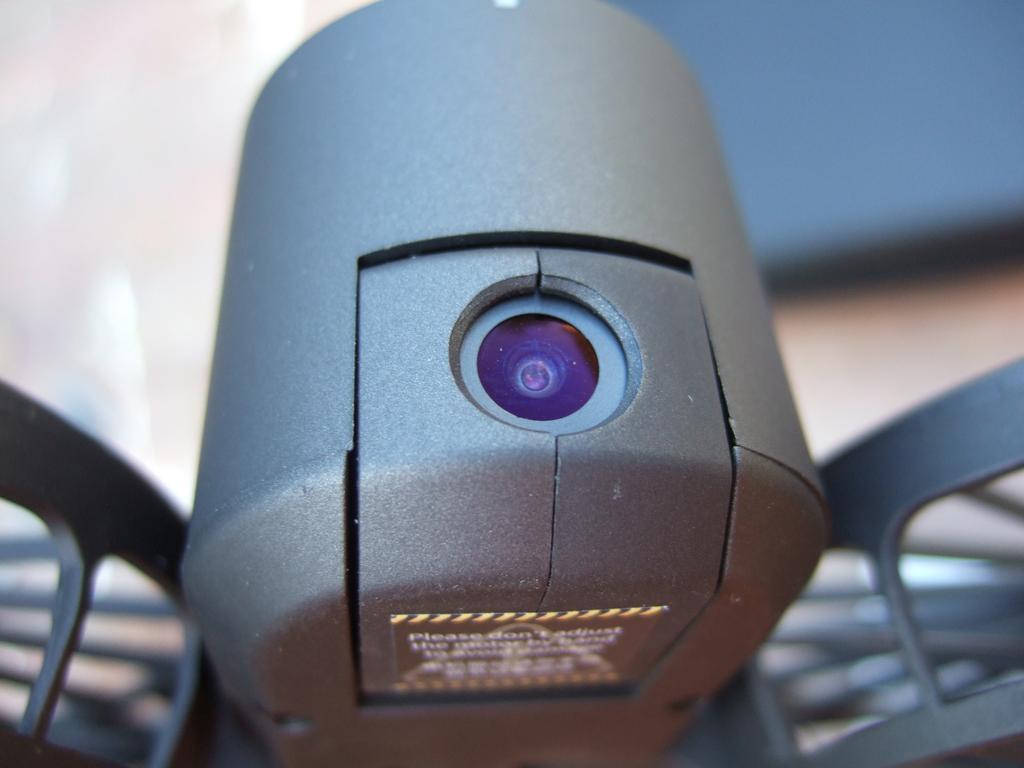 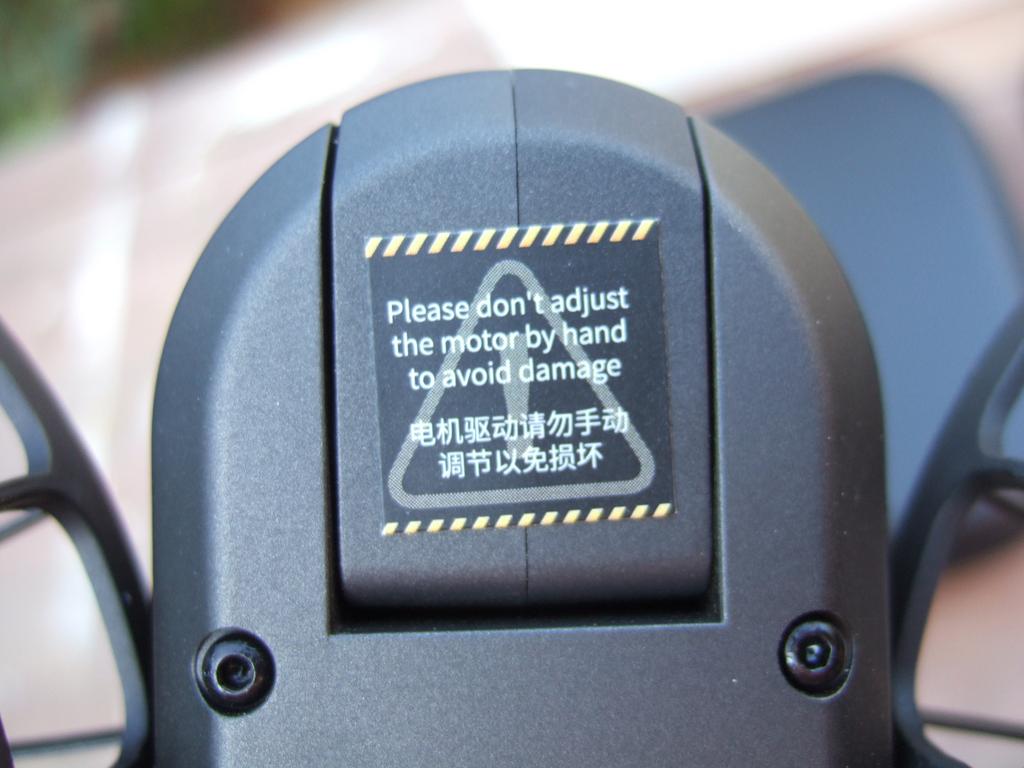 Notice the choppy video linked my non-V60 (60mbit/s) microSD. It was recording on a Samsung Evo+ 32Go with a maximum writing speed of 20 Mbit/s. The precision is correct but far to be reach the quality of to the best 4K camera. Seems it’s probably be interpolated from a lower resolution. You can notice, currently no sign of EIS

After installing the last “Moment Drone” appz for android…. the FPV connexion is done in the 2.4G band so no problem with any smartphone like we can have for some 5.8G connexions. For the first time, a full tutoral tour must filled. The iOS appz seems to offer extra option not currectly available in the Android one. Probably some future harmonization will be done. Currently, at least for android, only RTH and two different target tracking modes are offered. No sign of SLAM for example. The two type of target tracking preocedures are “Bust detection” and “Hand gesture frame” respectively.

Very important, full compass and gyroscope must be done the first time. Go in the settings on the top left corner to access to the main menu. After pressing the takeoff button the machine climbs first to 50cm then 1m high. For low altitude, the machine is stabilized by the Visual and ultrasonic sensors. The precision is correct … but not impressive, especially outdoors where you can have easily up to 1m of deviation in the z-axis. More and it’s already a first annoying point, the machine is not perfectly leveled in the air…. tends to be bent to the right direction…. impacting obviously the video’s horizon line. In term of control the appz offer only the “virtual button” one… it means with “0-1” small answer associated with some tap of the screen. It gives in practice some weird flight attitude non-smooth…. If long press on one button it can apply continuously a command …. but after relaxing it, you have an inertia in the last command taped. It can be problematic if you need an urgent stopping It’s not fantastic. I would dream an associated real 2.4G radio with this quadcoper. In term of FPV feedback the signal is a good with the first 30-40m then the video frame rate drop a bit but not disconnexion. I was able to reach up to 90-100m of distance. For the altitulde if you hold the throttle button, the machine climbs then slowy reduce the ascend rate… until you reach 10m….. but if you continue ti press in the second time, you can go more higher but it will be limited in any case to 20m.
From the screen, any sign of EIS 🙁 🙁 ….. at least it’s not chaotic like it is for the AirSelfie drone…. Without stabilization is relatively windfree conditions…. results are not so bad. Results with EIS should be impressive …. but actually it’s not here and not 100% confirmed it will be in a future firmware/App release. In term of video quality…. the 4K is correct without being fantastic… We can still see some compression artefact sand the 1080p looks a bit blured….. with probably a huge associated compression factor.

With the actual appz android release, there are a lot of bugs or annoying procedures. For example if you are recording and you press the target tracking mode, the recording is automatically stopped. You will need first to stop recording, run the target tracking then restart the recording. Weird. If you want to control the gimbal, you can’t control anymore the machine…. until you leave the gimbal control mode….
Let’s speak about the performances of the Target tracking ….. Whatever the two modes, results are simply unacceptable. The less worst mode…. just managed to track the target for a couple of seconds if this one move super slowly….. It’s just the worst target tracking I never saw….. In the current appz release no sign of the advertized SLAM…… 🙁 🙁 . More for a selfie drone, no specific selfie flight mode where commands are inverted to point the camera toward you. No other selfie pre-programmed flights…. too…. A lot of missing. In term of autonomy we have approximatively 10-11min of flight time before to reach 15% of battery level where an autolanding is automatically run whatever your current position.

In the current state, the SimToo Moment is a disapointement on almost any points. First … No specific selfie drone flight mode… and for a selfie drone pre-programmed camera trajectories… No EIS ….. and despite offering relatively stable videos, without EIS is far to be as good as the Zerotech Dobby or the Sunlytech ALPHAcam can offer with EIS. The target tracking is really not working… and is completly buggy/inefficient. No (yet) promised SLAM too …. In term of video quality … it’s correct but a huge compression factor is blurring even the 1080p recordings…… Well as you understood, I can’t recommend in the current state the SimToo moment at least until a major firmware/application update is not available.

This quadcopter have been courtesy provided by Banggood in order to make a fair and not biased review. I would like to thank them for this attitude.
You can find it actually for 246USD at https://www.banggood.com/SIMTOO-MOMENT-Airselfie-HOSHI-007PRO-WiFi-FPV-with-4K-HD-Gimbal-Camera-GPS-Folding-Arms-Selfie-Drone-p-1184218.html